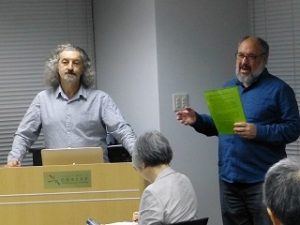 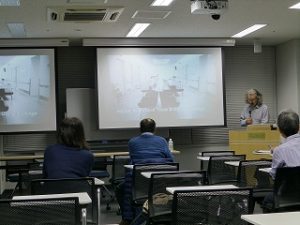 4. Abstract of the Forum
This is about the long journey to the screen of a documentary film that is a very serious subject: Nuclear weapons, nuclear power and the cause of many tragedies since the Manhattan Project’s first atomic bomb test at Alamogordo, New Mexico, July 16, 1945.
The film is about the effects of the Hiroshima atomic bomb in 1945, and 1950’s British atomic testing of 12 atomic weapons and 500 various minor trials on Australian aboriginal lands. Australian and Japanese Hibakusha art responses to the Hiroshima atomic bombing and British bomb tests are included. Book-ending the film is the 1945 Hiroshima bombing and the Fukushima Nuclear Power plant meltdown in 2011, and the ongoing effects of these events.
The speaker will describe the process of creating the documentary, which will be screened the previous weekend as part of the Hiroshima International Film Festival.

5. Profile of Lecturers
Born in Sydney in 1953, John Mandelberg is an award-winning filmmaker who has been working in Film & Television for 35 years in Australia and more recently in New Zealand. He has worked as a director, producer, editor, sound designer and writer, on a diverse range of programmes including drama, documentary, TV lifestyles, experimental, corporate and educational videos. As an educator, he is the Post Graduate Supervisor, the Program Co-coordinator, and the Tutor for Screen/Moving Image at the School of Media Arts degree program, Waikato Institute of Technology in Hamilton. He also taught editing at the Australian Film, Television and Radio School in Sydney.